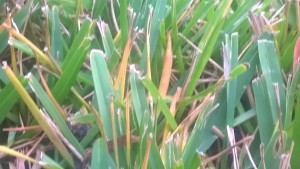 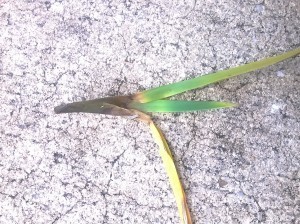 The fungus can appear differently according to specie of host grass.  Both Large Patch and Brown Patch Disease cause thinning yellow and brown patches of grass.  The areas are irregular curricular shapes which can be between a few inches to several feet in diameter. St. Augustine grass will continue to decline until death. Cool wet conditions continue to promote spreading of the fungus.  Cool-season grasses may display brown lesions on the individual grass blades.  Warm-season grasses the leaf will rot, turn black and disconnect at soil level.

To prevent the onset of spreading of Large Patch and Brown Patch disease do not mow grass when it is wet.  Apply nitrogen based fertilizers in late Spring or early Summer and not after August 15 at a rate of no more than 2 pounds per 1000 square feet for zoysia and St Augustine grass, 1-2 pounds per 1000 square feet for centipede grass and 4 pounds per 1000 feet for Bermuda grass.  Pro actively apply fungicides between September 20th and October 20th and between March 10th and April 10th when the fungus is most active.  Be sure to follow all manufactures instructions or contact a professional spray company in the Jacksonville and St Augustine areas.